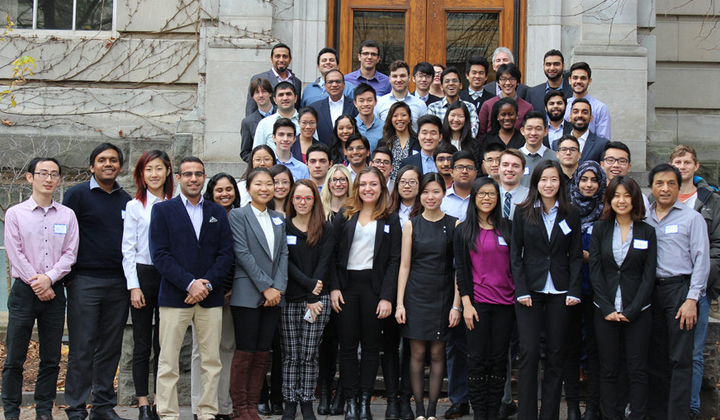 During the weekend of November 28-29, 2015, students from the University of Toronto’s departments of Chemical Engineering & Applied Chemistry, Civil + Mineral Engineering, Mechanical & Industrial Engineering, Earth Sciences, and Physics competed in U of T’s first PetroChallenge sponsored by NExT-Schlumberger and ShawCor.

Close to 90 students registered for the event and only 48 were offered spots. In teams of four, 12 groups used OilSim – an upstream learning simulator that takes its participants through the entire oil and gas exploration and production business process – to acquire expertise in strategy selection and decision-making. Guided by seasoned professionals from the sponsoring organizations, which also happen to be two of the world’s largest oil and gas service companies, student competitors faced and conquered real-world industry business scenarios and technical challenges.

“During the two-day event, we simulated a number of projects in the petroleum-upstream sector using the OilSim software. In reality this could take 10-plus years! It was the most exciting and intense practice of project management, time management and teamwork I have ever experienced,” says Mehdi Ghofrani Tabari, a geophysicist and recent PhD graduate from the Department of Physics.

Directly after the closing reception on November 29, eight students from the two highest scoring teams – including Tabari – received job interviews with senior members from NExT-Schlumberger and ShawCor.

“I was very impressed by the students who participated in the competition and happy that we took part in the event. Unique learning opportunities like the PetroChallenge give students a chance to put their knowledge to the test while going beyond standard curriculum,” says Ron Dunn, Vice President of Research and Development at ShawCor.

In just a few weeks, U of T’s student winners will travel to Houston, Texas and face opponents from Rice University and Penn State in the PetroChallenge Final from January 15-16, 2016.

“As a winning-team member, I’d like to thank U of T and the sponsors for brining this opportunity to us. This event absolutely bridges the gap between industry and academia, while offering hands-on engagement with potential employers. Not only has this event enhanced my knowledge of the petroleum industry and given me a competitive edge, it has furthered my interest in pursuing a career in the industry when I graduate in June 2016,” says Kyu Mok Kim, a fourth-year student from the Department of Chemical Engineering & Applied Chemistry.

On behalf of the University of Toronto, congratulations and best of luck in the Final to the following students:

To view pictures from U of T’s PetroChallenge weekend, visit the following links: