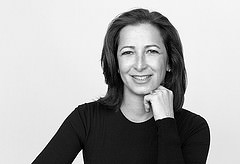 This week on December 5, Molly Shoichet was named the 2017 winner of the Kalev Pugi Award by the Chemical Institute of Canada (CIC)/Society for Chemical Industry (SCI). The award acknowledges exceptional achievements in research and development that provides significant benefits to Canada.

Shoichet is also the recipient of many prestigious distinctions and the only person to be a Fellow of Canada’s three National Academies. She is the L’Oréal-UNESCO for Women in Science Laureate for North America in 2015, holds the Order of Ontario and is a foreign member of the US National Academy of Engineering. Shoichet will be presented with the Kalev Pugi Award at the CIC/SCI annual Awards Dinner in Toronto on March 30, 2017.

Also in this week, Shoichet was featured on TVO’s The Agenda on December 6, and gave a high-profiled lecture at Waterloo’s Perimeter Institute on December 7. Both discussions focused on regenerative medicine and the role it will play on our health.

A big congratulations goes out to Molly Shoichet. 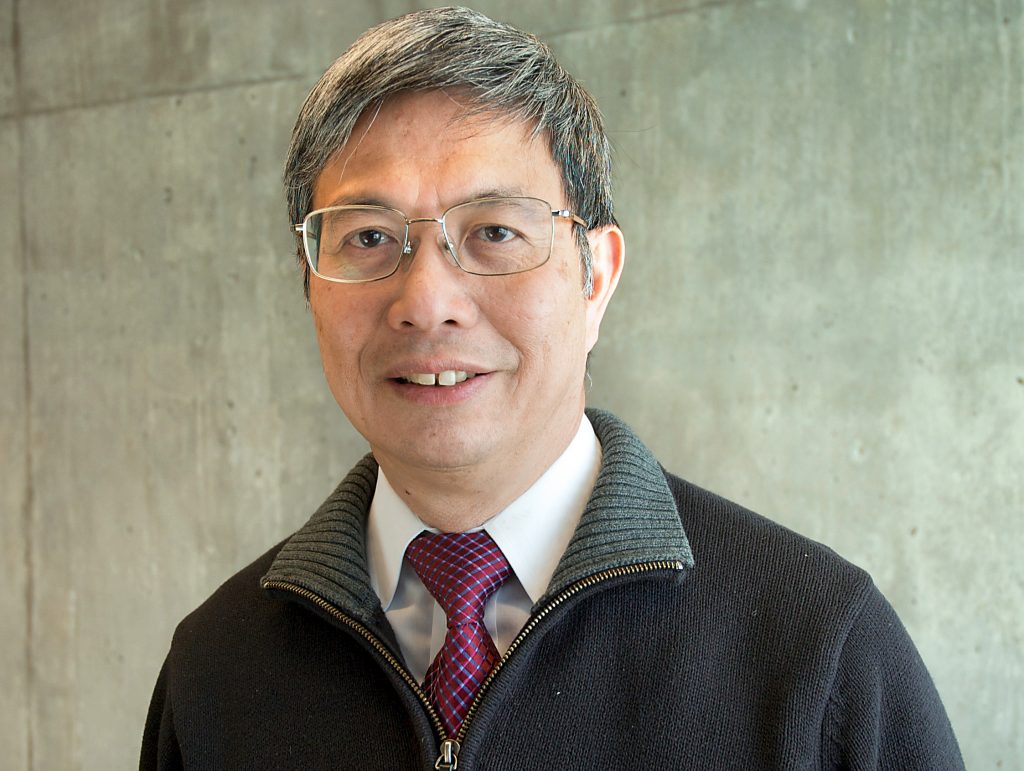 ChemE prof and alum Honghi Tran (ChemE PhD 8T2) has won the Gunnar Nicholson Gold Medal Award, presented by the Technical Association of the Pulp and Paper Industry. It is the highest honour that the association presents to an individual.

The award, first presented in 1928, is given to individuals “who have made preeminent scientific and engineering achievements of proven applied benefit to the world’s pulp, paper, board, and forest product industries.”

Prof. Tran is the Frank Dottori Chair in Pulp and Paper Engineering and the Director of Pulp and Paper Centre at the University of Toronto. Over the past 26 years, he has led and coordinated 10 research consortia reaching across borders and disciplines to advance the global pulp and paper industry. These consortia have undertaken projects involving more than 30 faculty members and 200 students from across the University, as well as 50 industrial partners from around the world. His current research focuses on three main areas: energy and chemical recovery in the kraft pulping process, alternative fuels for lime kilns, and combustion characteristics of biomass and mixed fuels. He has won numerous awards in the past, including the PAPTAC John S. Bates Gold Medal (2014), the ICRC Lifetime Achievement Award (2014), and the TAPPI Engineering Technical Award and Beloit Prize (2006).

“This award is well-deserved,” says Prof. Grant Allen, chair of the Chemical Engineering & Applied Chemistry Department at U of T. “Prof. Tran has been an integral member of our department and his research has an exceptional impact on the pulp and paper industry.”

The award ceremony will be held on April 25, 2017 in conjunction with the TAPPI PaperCon Conference in Minneapolis, MN. 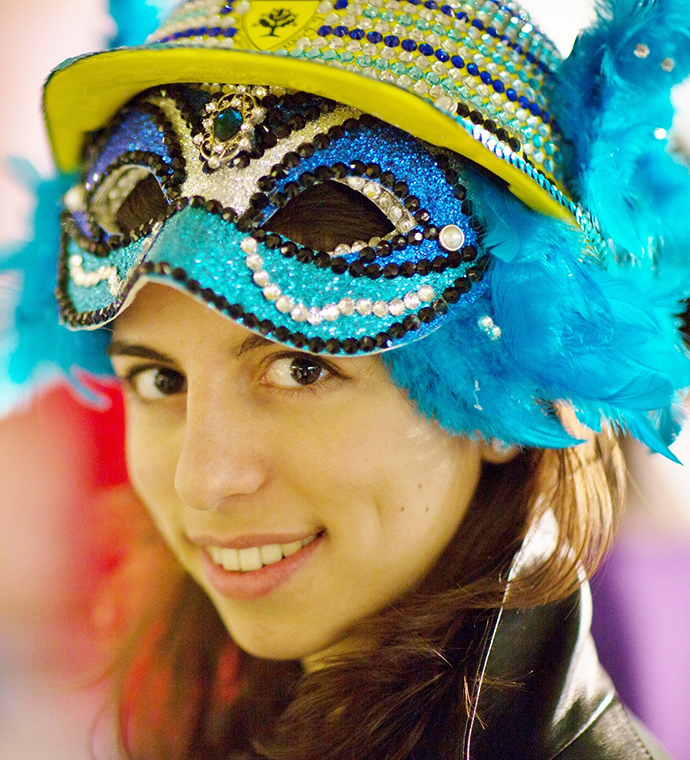 Stephanie Gaglione, who is majoring in chemical engineering at the University of Toronto, has been selected as a 2017 Rhodes Scholar, a prestigious annual scholarship to the University of Oxford. Gaglione, who loves to rock climb, run and canoe, celebrated by going out to dinner with friends and watching the new Harry Potter movie – but not before she finished working on an engineering design project to produce a chemical compound that could be used on a mission to Mars. Read full story.

David Colcleugh (ChemE 5T9, MASc 6T0, PhD 6T2) has received the Engineering Alumni Medal at the 2016 Engineering Alumni Association awards. Colcleugh’s leadership in commercial organizations forms an impressive record of personal growth and development through many levels at DuPont, rising to be president of DuPont Asia-Pacific and then chairman, president and CEO of DuPont Canada. Since his retirement in 2003, Colcleugh has been using his leadership expertise to build and grow companies and teach the next generation of entrepreneurs, executives and engineers. His leadership philosophy and pedagogy has had a profound influence at U of T Engineering.

The EAA awards, which celebrate alumni for their outstanding contributions to the Skule™ community as well as their remarkable career achievements, were presented at the Great Hall at Hart House on November 3. 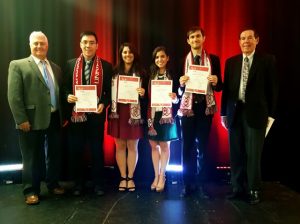 The case study was focused on the mining industry and students were asked to resolve issues in the cyanide solution mixing process used to extract base metals in the ore. Katherine Dritsas, Andrew Kostruba, Kayla Musalem and Kenny Wei made up the U of T team that was among the three finalists that presented at the conference. The team took home a prize of $300 for finishing second. The competition is sponsored by Minerva Canada and its industry partner, the Chemistry Industry Association of Canada (CIAC).

Ziyu Bao was also awarded first place in the Robert G. Auld Student Paper Competition, while U of T’s student chapter of the Canadian Society for Chemical Engineers (CSChE) won honourable mention for its involvement and creativity in student life.

Kayla Musalem, chair of U of T’s student CSChE, says that students found the conference valuable beyond the awards. “Attending lectures and presentations reignited our enthusiasm for the opportunities available in chemical engineering industry and academia,” she says.

Students will have an opportunity to compete for awards and gain important insight again at the 2017 Canadian Chemical Engineering Conference in Edmonton (Oct. 22-25).

University Professor Molly Shoichet, a world-renowned researcher and leader in the use of biomaterials to enhance stem-cell delivery for treating disease conditions from stroke to blindness, is the recipient of the 2016 Till & McCulloch Award. The award recognizes both Shoichet’s contributions to global stem cell research, and her 2015 paper on the use of hydrogels for stem cell transplantation as the most impactful stem cell research publication authored in Canada in the past year.

Seven U of T Engineering faculty members have received the inaugural Percy Edward Hart and Erwin Edward Hart Professorships, enhancing emerging research and education across the Faculty. Among the winners is ChemE prof and alumna Alison McGuigan. Prof. McGuigan completed her Chemical Engineering Ph.D. at U of T in 2005 and joined the department as a faculty member in 2009.

University of Toronto biomedical engineering University Professor Michael Sefton (IBBME, ChemE) has been named this year’s recipient of the Lifetime Achievement Award from the Tissue Engineering & Regenerative Medicine International Society (TERMIS). The award, issued by the organization’s Americas chapter, recognizes his immense contributions to the fields of tissue engineering and regenerative medicine. 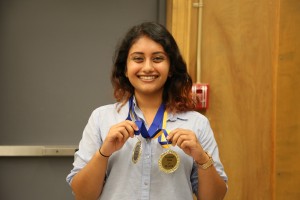 On August 9, Onasvi Kharsikar (ChemE 1T8) won two medals at the 2016 Undergraduate Engineering Research Day (UnERD). This annual one-day research conference held at the University of Toronto is hosted by students from the Faculty of Applied Science & Engineering and gives summer research-students the opportunity to share their research achievements in an academic showcase.

Two ChemE engineers have been honoured by the Ontario Society of Professional Engineers (OSPE) and Professional Engineers Ontario (PEO) with Ontario Professional Engineers Awards. Valerie Davidson (PhD 8T3) is receiving a Citizenship Award, which recognize engineers who have made significant contributions to society. Larry Seeley (ChemE 6T6, MASc 6T8, PhD 7T2) has been chosen to receive the Gold Medal, recognizing public service, technical excellence and outstanding professional leadership. The recipients will be honoured at a gala at the International Centre in Mississauga on November 19, 2016.

“I am delighted that OSPE and PEO have recognized these outstanding U of T engineers for their accomplishments, their leadership and their service to the profession and to the community,” said Dean Cristina Amon. “These prestigious awards are a testament to the wide-ranging and meaningful contributions made by our faculty and alumni in all aspects of engineering and beyond.”