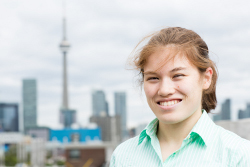 I was one of two U of T Engineering students who had the opportunity to attend the Catalyst Canada Honours Conference, as part of the BMO Millennial Leaders Advisory Council in November 2015. BMO invited 30 female-engineering and -business students from top schools across Canada. U of T had three students invited, two from Engineering and one from Rotman. Most students were nominated by their Faculty’s Dean to attend the conference, however some completed an essay challenge to earn their spot.

We arrived the night before the conference and met both BMO and Catalyst Canada representatives. They hosted a dinner so that we had the opportunity to meet the other students. The room was full of high-achieving girls who were excited to be able to attend and participate in the event.

The Catalyst Canada Honours Conference started the next morning. The day began with a panel discussion with the three Catalyst Canada honourees who were being recognized for their commitment to the inclusion and advancement of women in the workplace. Some interesting themes came up regarding the difference between having targets versus quotas when looking to hire or promote women in the workplace. The honourees discussed their experiences, as well as current events, such as Prime Minister Trudeau’s half-female cabinet.

Lunch was followed by an engaging workshop presented by Janet Kestin and Nancy Vonk, the co-founders of SWIM Leadership Consultancy and creators of the Dove Campaign for Real Beauty. They discussed with us the importance of “taking the microphone” and raising one’s hand for promotion. Their focus was on showcasing one’s achievements and strengths. We did a practice “introduce yourself to Oprah” activity with our neighbor, and learned about the importance of having a couple of things ready to say about yourself when meeting new people so they can easily relate to you.

The day finished with a keynote address by Ken Dryden, Hockey Hall of Fame goalie and former Federal Cabinet Minister. He gave an excellent talk about the development of talent in Canada, drawing parallels to talent development in hockey. He discussed the idea of a similar system to the Leafs Dreams program that has elementary school teachers nominate students who they think have talent. He explained that these teachers act as “talent scouts” similar to the scouts that get sent out to look for talented hockey players. He built on this concept that Canada needs a system to scout corporate talent so that people with potential don’t fly under the radar.

That evening we attended a dinner where the Catalyst Canada honourees received their awards. The Governor General, women who broke through barriers including Roberta Bondar, the first female RCMP officer, and the first female pilot also attended the dinner. BMO placed us at a couple of tables, each with a BMO executive.

On the second day, we had the chance to have a round table meeting with Bill Downe, Chief Executive Officer of BMO Financial Group, and Alex Johnston, the Executive Director of Catalyst Canada. They wanted to hear our opinion on what Millennials are looking for as they enter the workforce. The main themes of our discussion highlighted that Millennials want to have an impact and a voice in the workplace early on in their careers. We ended our trip with a tour of BMO and the BMO stock exchange floor, followed by a lunch with all of the BMO and Catalyst Canada staff we’d had the chance to meet over the two-day conference. The entire experience was extremely inspirational and a great opportunity to network with other women. I really appreciated the opportunity to be able to attend. This was the first meeting of the BMO Millennial Advisory Council. BMO and Catalyst Canada will be reaching out to us in the near future for our opinions. I am very excited to share my thoughts and visions with them.