Skip to Main Content
U of T ENGINEERING
Posted May 7th, 2018 by Jennifer Hsu 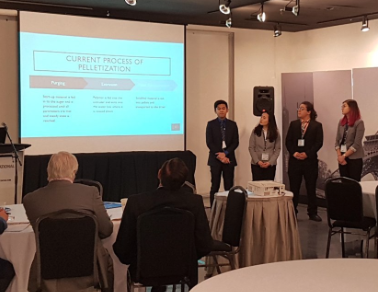 The case study focused on an employee injury resulting in second-degree burns. Students were asked to identify the underlying causes of the incident and make recommendations to avoid a repeat event. The top three teams across Canada were invited to present their reports during last week’s Partners in Prevention Conference held in Mississauga, Ontario.

“I was so proud of our U of T Chemical Engineering students who presented their recommendations in response to the case study. They did such a fantastic job with a thorough and structured analysis of the incident. I couldn’t stop myself from smiling and nodding along, as they talk about management of change,” said Parnian Jadidian (ChemE 1T1), a Process Safety and Risk Management Consultant and ChemE MASc Candidate who happened to be at the conference.

The award is presented each year by Minerva Canada and its industry partner, the Chemistry Industry Association of Canada (CIAC). Bob Masterson, President and Chief Executive Officer of the CIAC and Anthony Pasteris, President, Minerva Canada presented the $1,000 first-place prize to our ChemE team. Student teams from the University of Calgary took home second- and third-place prizes. Congratulations to all participants!