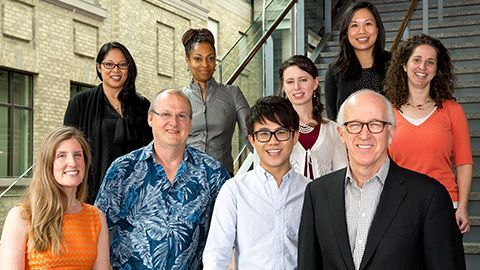 Congratulations to the entire team at the Troost Institute for Leadership Eduction in Engineering (ILead), whose unique and innovative training program has won the prestigious Alan Blizzard Award for Collaborative Training. The award recognizes the institute for integrating leadership education into U of T’s Engineering experience and for providing students the opportunity to gain non-technical skills that are crucial to career and personal development.

ILead provides undergraduate and graduate leadership training that teaches students how to handle the human challenges of engineering such as working effectively in teams, using interpersonal skills and communicating effectively.  “Employers tell us leadership skills are necessary for their companies to thrive, and we all know that teams that function effectively are more fun and more successful,” said Doug Reeve.  In addition to its student programming, the institute also conducts research on engineering leadership practices and pedagogy.  “At ILead, our collaboration is enriched by the diversity of perspectives on the team: the social scientists inform us about humanist ideas and ideals, the educators teach us about teaching and learning, and the engineers insist on systems, frameworks, analysis and data.”

The institute grew out of a program originally developed in the ChemE department in 2002, called the Engineering Leaders of Tomorrow program (LOT).  LOT began as a summer leadership program for undergraduate students but rapidly grew to include Fall and Winter programming, due to its outstanding success and popularity among students.  LOT won funding from the Provost’s Academic Initiative Fund in 2006, which allowed its leadership training to be offered to students throughout the Faculty of Applied Science & Engineering.

After launching the first LOT academic courses in 2007, LOT initiated the Leadership Infusion Lecture Series as well as four co-curricular certificate programs.  In response to the program’s popularity and rapid growth, the Faculty established ILead in 2010, naming Professor Doug Reeve as its founding director, Professor Greg Evans as associate director, and Annie Simpson as assistant director.

Read more about ILead and the Alan Blizzard Award here.