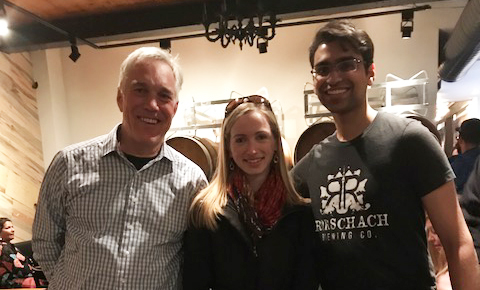 Rorschach Brewing Company is Toronto’s newest craft brewery, which officially opened its doors on Saturday, April 22, 2017. Founded by three ChemE graduates from the Class of 1T0 – Matthew Reiner, Christopher Ristevski and Mohan Pandit – Rorschach is the culmination of years of home-brewing, traveling, and exploring countless craft breweries and beer gardens. The three, by a chance encounter met Ben Ragan, a kombucha enthusiast with years of experience in fruit fermentation who has joined them on their journey. The opening of Rorschach was attended by members of the Department including Professors Grant Allen and Jennifer Farmer, pictured above with Mohan.

Rorschach is guided by a simple brewing philosophy that aims to craft beers that focus on complexity and drinkability. Simply put, these are beers that entice the palate and quench the thirst. Rorschach intends to focus on a few styles of beer, including hop forward and mixed fermentation ‘farmhouse-style’ ales, barrel aged beers and sours.

Located at 1001 Eastern Avenue in the Leslieville and Beaches Area, the brewpub is directly positioned across from Jonathan Ashbridge Park, and a 5-minute walk from Woodbine Beach – making it the perfect spot to enjoy a cold beverage on a nice warm day. With summer right around the corner, the Rorschach gang hope that you’ll swing by to say hello and enjoy a pint with them.