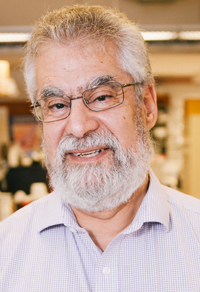 University Professor Michael Sefton (ChemE, IBBME) has received a rare honour that few Canadians hold. He was invited to join the United States Institute of Medicine (IOM), which is the health arm of the National Academy of Sciences and advises U.S. policy makers on scientific and medical matters. Only 10 non-U.S. members are elected to the IOM each year.

Professor Sefton is a pioneer in the area of tissue engineering and regenerative medicine and is working on solving the mystery of how blood vessels grow, with the goal of developing engineered tissues with strong vascular function.

Learn more about the IOM and Professor Sefton’s work.

In addition to his election to the IOM, Professor Sefton received a special gift this week: the journal Biomaterials Science published a special themed collection in honour of his 65th birthday. The collection includes articles from several of his former graduate students, including ChemE Professors Alison McGuigan and Milica Radisic, who have themselves gone on to be leaders in their field. 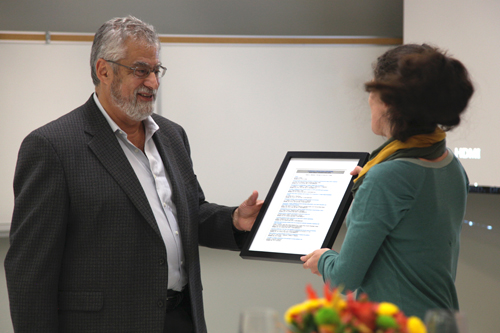 Professor McGuigan presents Professor Sefton with the Table of Contents of the Biomaterials Science special collection at a reception in his honour this week.