Skip to Main Content
U of T ENGINEERING
Posted May 23rd, 2014 by Mike Astbury 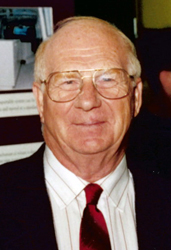 The Department of Chemical Engineering and Applied Chemistry is sad to announce the passing of Professor Emeritus Robert E. Jervis on his 87th birthday on May 21st.  Professor Jervis was a highly accomplished and respected member of our Department, truly a Canadian pioneer with international impact in the field of applied nuclear chemistry.  More than that, he was a kind and generous man who led by example with compassion for everyone he met.  His genuine love of science and engineering inspired his students and colleagues alike.  He will be missed by those who had the pleasure of working with him and learning from him.

Professor Jervis was born in Toronto and raised during the depression years.  He attained an undergraduate degree in Math, Physics and Chemistry in 1949, an M.A. in 1950 and a PhD in Physical Chemistry in 1952, all from the University of Toronto.  He subsequently worked at the Chalk River nuclear research facility pioneering novel methods of trace element analysis in the environment by applied nuclear chemistry.

Professor Jervis joined the U of T Department of Chemical Engineering and Applied Chemistry in 1958, where he continued his research in applied analytical and environmental chemistry for the next five decades.  His work focused on the peaceful use of nuclear energy in industry, life sciences and forensic sciences.  He gained significant national and international recognition for his work on human exposure to heavy metals, which increased awareness of their environmental and health impacts.  He also played a dominant role in applying activation techniques in Canada and abroad.

A field in which Professor Jervis was a pioneer was the use of trace elements to identify sources of pollution and to assess the environmental impact of fossil fuel combustion.  He also developed this technique for use in forensics, using trace elements in hair as bioindicators of exposure to environmental pollutants.  This technique was used to study arsenic levels in gold miners, mercury in aboriginal people and lead in urban children.

His work took him around the world lecturing and consulting with scientists and scientific bodies and as a visiting professor at the University of Tokyo, University of Cambridge and University of Kuala Lumpur. He published over 250 scientific papers. 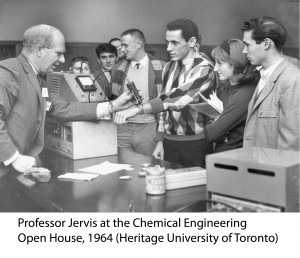 Professor Jervis received numerous awards and honours: the Lewis Medal, Canada’s highest nuclear scientific award; the international Hevesy Medal, for radioanalytical chemistry; the American Nuclear Society’s Emmon Medal; and he was the first foreign recipient of the Russian Academy of Science’s Ressovsky Medal. He was a fellow of the Royal Society of Canada, the Canadian Nuclear Society, the Canadian Society for Chemistry and an honourary fellow of the Atomic Energy Society of Japan and the Indian Academy of Sciences.  His deepest professional satisfaction came from instilling first year students with a love of science.  As a testament to the impact he in the classroom, in 1992 a group of his former students established the R.E. Jervis Award in his honour, which each year recognizes a graduate student for outstanding work in nuclear engineering, with support from the Canadian Nuclear Society.