Time may not heal all wounds, but a proprietary mix of peptides and gel developed by U of T Engineering researchers heals most.

A team led by Professor Milica Radisic (IBBME, ChemE) has demonstrated for the first time that their peptide-hydrogel biomaterial prompts skin cells to “crawl” toward one another, closing chronic, non-healing wounds often associated with diabetes, such as bed sores and foot ulcers. Read full story.

The research project entitled, SYNBIOMICS: Functional genomics and techno-economic models for advanced biopolymer synthesis, which Professor Emma Master co-leads with Harry Brumer of UBC, is one of 13 winning projects from Genome Canada’s 2015 Large-Scale Applied Research Project Competition. Successful projects were selected based on genomic approaches to address challenges and opportunities of importance to Canada’s natural resources and environmental sectors, including interactions between natural resources and the environment, thereby contributing to the Canadian bioeconomy and wellbeing of Canadians. The 13 projects will collectively receive $110 million over four years.

SYNBIOMICS, is focused on harnessing the genetic potential of microorganisms to identify and develop new biocatalysts that can be used to create materials from trees, such as resins, coatings, bioplastics and adhesives. The project will also foster small and medium-sized enterprises that will work together synergistically with nearby pulp mills, creating lasting knowledge-based economic opportunities for Canada’s forest sector and rural communities. The project will receive $9.5 million from Genome Canada. 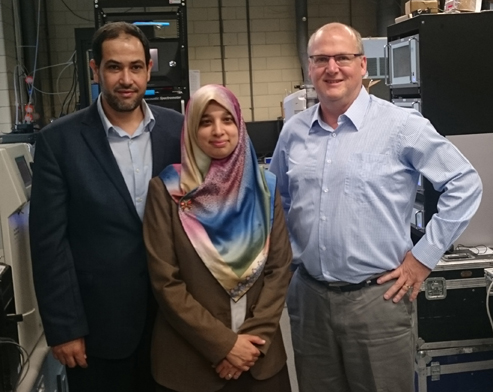 Sarah Attia (ChemE MASc 0T5) and her husband Khaled Al-Qazzaz (MIE MASc 0T3) recently visited the Department of Chemical Engineering & Applied Chemistry to thank the Department for its support. This past summer, Al-Qazzaz was reunited with Attia and their four children after he spent three years trapped in Egypt, much of it in a cell.

In 2013, Al-Qazzaz was arrested in Egypt while serving as an aide to ousted Egyptian president Mohammed Morsi. He was held for months in secret.

“I had no idea where he was, what was going to happen to him, and when we would ever see him again,” says Attia. “I spent weeks not knowing anything about him with no end in sight. Those were the most difficult nights of my life.”

Even after she learned where he was being held, she realized she would need help getting him released.

She returned to Canada to look for help. In April 2014, she held her first press conference at Queen’s Park. At the back of the crowd that had gathered, she saw a familiar face. Her MASc supervisor, Prof. Greg Evans, was there to support her.

“It had been years since I had seen Prof. Evans,” she says. “Looking up and seeing him that day gave me a new sense of hope and motivation. It was people like him who gave me the strength to continue.”

Prof. Evans continued to advocate for her and Al-Qazzaz after the press conference. He circulated petitions, wrote letters to MPs, and , signed – along with ChemE Chair Grant Allen and fourteen other U of T faculty members – an open letter calling for the release of Al-Qazzaz.

“Our relationship with our students does not end with graduation,” says Prof. Evans. “When they push for positive change anywhere in the world, we want them to know that we are interested and will do what can to help.”

It wasn’t just faculty. U of T alumni, including Attia’s former classmate Badi Khan (ChemE 0T2, MASc 0T4), came together to form the Friends and Family Campaign team calling for the freedom of Khaled AlQazzaz.

“The assistance I received from the U of T community was truly touching,” says Attia. “If it wasn’t for their continued advocacy my family would not be united back in Canada today.”

Motivated by the growing support for Al-Qazzaz across Canada, the Canadian government lobbied for, and eventually secured his release and safe return to Canada.

“Khaled and I are so grateful to everyone who stood by us,” says Attia. “We have become much stronger as a family and cherish every moment we spend together.”

Every person on this planet needs clean water to survive. Yet the World Bank estimates that 1.6 billion people — that’s more than one in five — live in a region of “absolute water scarcity.” That number is expected to climb to 2.8 billion by 2025 due to climate change.

Professor Ramin Farnood (ChemE PhD 9T5) has devoted much of his career to developing novel methods of treating both waste and drinking water to eliminate both microbial and chemical contaminants. Now, he’s applying that expertise to mitigating climate change.

The research connection between clean water and climate change mitigation is a new one, born out of the novel membrane technologies Farnood and his research group have developed over more than five years of work.

“We’ve recently begun looking at using these membranes to remove carbon dioxide from air,” says Farnood. “We’re also studying converting biomass — such as sewage and algae — to hydrogen and methane as an alternative source to fossil fuels for energy.”

You can sequence your unique genome in search of genetic mutations that cause disease. But it’s much harder to study your ‘exposome’ — the cumulative effect of your environment on your health over a lifetime.

“Every person has a unique history of what they’re exposed to in their environment, from before they were born to their present age,” says Brook, who is spending eight months away from his primary role as a senior research scientist with Environment Canada to lead CANUE out of the University of Toronto. “It’s like a fingerprint or unique signature — and that profile is as important in determining your health as your genome.” 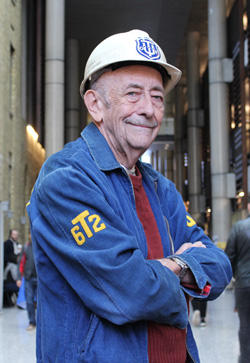 UPDATE: We Did it! The Department of Chemical Engineering & Applied surpassed the goal of 500 donations before December 31st to unlock the $50, 000 donation from Bill Dowkes. Thank you to everyone who donated during the campaign!

Bill Dowkes (ChemE 6T2) has been a fixture in the Department of Chemical Engineering & Applied Chemistry for a long time.

His decades of involvement with Skule started as an undergrad and went on to take many forms – all of which have helped to shape the landscape of the Department. Over the years, Dowkes has worked as the Assistant Secretary of the Faculty of Applied Science & Engineering, Secretary of the Engineering Scholarship Committee, Chair of Admissions, ChemE Lecturer, and more. As a long-time supporter, Dowkes has generously established and supported several scholarships and other U of T activities such as the Hart House Camera Club.

“I give to ChemE because I appreciate the high quality of education it offers, not only in terms of engineering, but also in terms of life lessons,” says Dowkes.

Today, his support continues with the 500 for 50K Challenge. If ChemE can generate 500 monetary gifts from alumni, staff and faculty by December 31, Dowkes will make a $50,000 donation toward ChemE student scholarships.

“I put the challenge to employees, alumni and supporters,” declares Dowkes. “If ChemE positively impacted your life, pay it forward by making a contribution.”

Stay tuned for updates on social media as we take on the 500 for 50k challenge!

Shairsingh is working on the Exposome project that is trying to explain the relationship between disease and exposure to pollution.

“What if your lifestyle habits and your exposure to certain pollutants, whether they be from the air or water, have more influence on you than you imagined?” asks Shairsingh.

In order to answer this question, the project tries to predict the amount and type of pollution people are exposed to based on where they live. The problem, however, is that people don’t always stay in one spot, and predictive models are often based on specific locations. It isn’t easy to predict the pollution exposure for someone born in downtown Toronto who then moves to Richmond Hill, for example.

That’s where Shairsingh’s research comes in.

Shairsingh develops air pollution concentration maps with Professors Jeff Brook and Greg Evans in U of T’s Southern Ontario Centre for Atmospheric Aerosol Research (SOCAAR). She takes models designed to help predict pollutant exposure in specific urban areas and makes it easier to transfer them to other areas.

For example, current models measure levels of pollutants like nitrogen oxide, which can come from local sources (like car exhaust) and background sources (like air mass from North America). Shairsingh says that these two sources are quite different.

“Think of it like a mousse cake,” she explains. “The car exhaust is like the jiggly mousse on top of the dense cake layer, which is like air mass from North America.”

Shairsingh’s work separates predictive models into two parts that reflect the distinct sources of pollutants, and then works to understand how pollutants from each source behave differently. The results of her work will be better, more transferable predictive models.

While the research opportunity was the central motivation for the exchange, Shairshingh says she is enjoying her time in the Netherlands.

“Utrecht has a charm that brings together old traditional townscapes with modern living,” she explains. “The convergence of a healthy biking culture and few cars in the heart of the city is truly a breath of fresh air.”

Joining Shairsingh in Utrecht is Joseph Okeme, a PhD student with Professor Miriam Diamond at the University of Toronto Scarborough’s Department of Physical & Environmental Sciences.

NOW magazine recently published a feature article on ChemE University Professor Molly Shoichet and the numerous awards she has received. Prof. Shoichet has been turning heads for her innovative work in stem cell science and drug delivery systems. She won the 2016 Till & McCulloch Award, which recognizes Canadian stem cell researchers, for her studies related to the use of hydrogels for stem cell transplantation.

University of Toronto professor Michael Sefton (ChemE, IBBME) has been presented with a major research award from international diabetes foundation JDRF to advance treatment research for type 1 diabetes (T1D). The funding, valued at approximately $1.1 million ($845,135 USD), supports a three-year study at the University of Toronto’s Institute of Biomaterials & Biomedical Engineering (IBBME) to explore an experimental treatment that involves transplanting healthy pancreatic cells into patients living with the disease.

The University of Toronto student chapter of the Canadian/National Electrical Contractors Association (CECA/NECA) is one of three finalists to compete at the 2016 Green Energy Challenge in Boston this weekend. The students from U of T Engineering are the only Canadian team, and will compete against teams from Iowa State and the University of Washington. The final three were selected from 14 proposals. Arthur Leung (ChemE 1T7) and Claire Gao (ChemE 1T6 + PEY) are both part of the team.