Co-hosted with the Centre for Global Engineering (CGEN)

We all need food – so that we don’t go hungry, stay fit, active and healthy through our lives. But if the food we consume doesn’t contain essential vitamins and minerals, that our bodies need on a daily and consistent basis – we will never reach our full potential.  One in three of us do not get enough micronutrients to survive and thrive. In large parts of South Asia and sub Saharan Africa, more than half of all mothers and young children are anemic and iron/folate deficient compromising their health and survival and the lives of their children.

Research at the Department of Chemical Engineering, University of Toronto spanning nearly two decades has enabled us to develop a cost-effective and sustainable means of ensuring that people living in all regions of the world receive their micronutrients through table salt. Our work covered basic research, stability, consumer acceptability and efficacy testing and scale up to commercial levels. For just 25 cents per person per year it is now possible to add micronutrients like iron, folic acid, vitamin B12 and zinc (in shelf stable and efficacious forms) to salt. 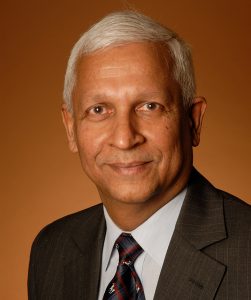 Venkatesh Mannar is a technology leader who has pioneered effective international nutrition initiatives focused on the world’s most vulnerable citizens.  As President of the Micronutrient Initiative Canada (MI) headquartered in Ottawa for nearly 20 years till 2014, he played a major role in the development and expansion of health and nutrition programmes to address hidden hunger globally.

Mannar currently divides his time between India, Canada and the United States. He serves as a Special Adviser on Nutrition to the Tata Trusts and The Tata Cornell Agriculture & Nutrition Initiative. He pursues his research and teaching interests through appointments with the Centre for Global Engineering, Faculty of Engineering & Applied Science, University of Toronto and the Division of Nutritional Sciences, Cornell University. He has co-authored more than 100 articles in leading journals and is the co-editor of ‘Food Fortification in a Globalized World’.  Mannar and his co-researchers have developed cutting-edge technologies to enhance the nutritional quality of foods.

Mannar has been appointed an Officer of the Order of Canada, one of the country’s greatest civilian honours, for his leadership in the global fight against malnutrition and micronutrient deficiency.  He was also conferred with an Honorary Doctor of Science Degree by the University of Toronto.