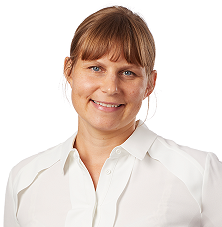 Influenced by her parents who were academically oriented, Tamara Champ (ChemE 0T2+PEY) was motivated at an early age to get into U of T’s Department of Chemical Engineering & Applied Chemistry (ChemE). Enjoying science and biochemistry, and excited by the freedom to move to Toronto after growing up in a smaller town, Tamara applied and was accepted into the ChemE program.

Her adjustment to life as an undergraduate did not take long, as she wasn’t afraid to take on new challenges. “During my second year, I was inspired by a speech given by Dr. Christopher Yip in regards to his research in the Institute of Biomaterials and Biomedical Engineering. I approached him quickly after the lecture and secured a position as a summer student in his lab before third year, and then completed my fourth-year thesis under his supervision,” recalls Tamara.

Despite loving research, she struggled with the decision on whether to pursue graduate studies after completing her degree or to move into industry and start her career. With chemical engineering jobs being scarce at the time, she felt lucky to have been offered a metallurgist role with Inco, her former PEY Co-op employer, and decided to accept the offer.

At Inco, she worked in positions from pyrometallurgist to senior specialist in metallurgical processes. Tamara’s focus was in high temperature extractive metallurgy. She worked to improve performance of predominantly nickel smelters in Canada and Indonesia, where she spent 18 months leading a team in smelter improvement projects.

After seven years with Inco, Tamara was ready for a change and accepted a position as an improve process engineer with WorleyParsons in Toronto. In 2010, she transferred to WorleyParsons in Brisbane, Australia. “It was an adventure moving and settling into a new city and country. I became involved in some diverse capital projects including bauxite in the Northern Territory, coal-infrastructure projects in Queensland, and construction of an ammonium nitrate plant in central Queensland. My work in central Queensland culminated in taking on the reliability engineering and operation of an islanded coal-seam methane power station,” details Tamara.

Always looking for new challenges and experiences both in career and lifestyle, Tamara decided in 2013 to enjoy a year of travelling and cycling through Europe. She then joined a major equipment manufacturer as a project manager, which gave her another stakeholder perspective in what it takes to create a major development. Highlights of this endeavour included the construction and delivery of process-plant equipment to a major greenfield iron ore project in Western Australia. Additionally, her work on leading the design of a concentrator for a copper-gold project in Papua New Guinea further expanded her network of industry connections, which led to a new opportunity with Ausenco, a global engineering services provider. In this role, Tamara leads studies and projects in Australia, Papua New Guinea, Chile, and Peru. She has also taken on a secondment opportunity in a client team supporting a copper-gold project in a remote, pristine location in Papua New Guinea.

“My current position is incredibly interesting and rewarding, as it involves multinational groups developing a nation-building project in a developing country. I am working with investors, in-country government, community groups, as well as incorporating innovative solutions for technical matters,” says Tamara.

Where does Tamara see herself in five years? “I want to continue to challenge myself to move out of my comfort zone. I don’t know what I will be doing, but I’m sure it will be different. I would like to lead my own team as a senior manager. I am ready for this.” To help her on this venture, Tamara secured a scholarship to participate in the prestigious Executive Leadership in Major Projects program at the University of Sydney’s John Grill Centre for Project Leadership.

If anything can be learned through Tamara’s journey, it is that career paths do not have to be straight and defined. They can be broad, diverse, and marked with achievements across a global footprint that reflects adaptability, a level of adventurousness, relationship building, and preparedness to work hard every single day.