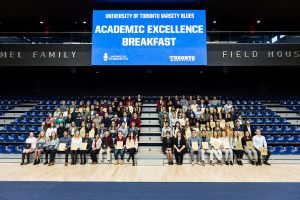 U of T Engineering students in attendance at the Academic Excellence Breakfast. (Photo: Seyram Mammadov)

On November 20, 2019, 233 University of Toronto student-athletes were recognized at the 10th annual Academic Excellence Breakfast, which was held at the Goldring Centre for High Performance Sport.

Twenty-three U of T Engineering undergraduate and graduate students were honoured at the event, including Zachary Frangos (ChemE 2T1) for Cross Country and  James Keane (ChemE 2T1) for Lacrosse

The ceremony honoured student-athletes who, while competing on a Varsity team, earned an 80% average or higher in all courses they were enrolled in during the 2018-2019 academic year. Each recipient received a pin: enamel for first-time winners, bronze for second, silver for third, gold for fourth and a diamond pin for anyone earning this award five or more times during their intercollegiate career.

“Attending the Varsity Blues Academic Excellence Breakfast is a highlight in my annual calendar,” said Don MacMillan, Faculty Registrar, U of T Engineering. “It’s an opportunity to celebrate our incredible community of student-athletes and recognize their academic and athletic achievements.”

Click HERE for more on U of T Engineering student athletes who were honoured at the breakfast.