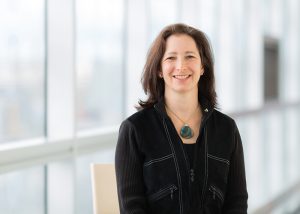 University Professor Molly Shoichet (ChemE, IBBME, Donnelly) has been elected as a Fellow of the Royal Society, the U.K.’s national academy of sciences. The organization is the world’s oldest scientific academy, and one of its most prestigious.

“It’s a great honour to join this list of scholars whose work has shaped and changed our understanding of our world, and what is possible,” said Shoichet. “I am thrilled to be named among more than 180 women engineers, scientists and researchers who blazed this trail before me. I hope that the generation of women and men who are studying and embarking on careers in STEM today will find countless inspiring examples of women leading in their fields.”

“It’s wonderful to be sharing this recognition with two other brilliant scientists at the University of Toronto, Barbara Sherwood Lollar and Benjamin Blencowe.”

As the Canada Research Chair in Tissue Engineering, Shoichet is pursuing solutions to a critical issue in medicine: treating damage to nerve tissues. She and her team design and implement novel strategies to promote tissue regeneration after traumatic spinal cord injury and stroke. Her lab is known for its use of materials called hydrogels, which surround and protect stem cells when they are injected in the body. These hydrogels help stem cells survive and integrate into tissues, including tissue damaged by stroke, macular degeneration or other diseases.

Shoichet is a passionate advocate for science and engineering and the important role they play in society. She has provided strategic advice to both the federal and provincial governments through her service on Canada’s Science, Technology and Innovation Council and the Ontario Research Innovation Council. In 2014 she was appointed by U of T to the newly-created role of Senior Advisor to the President on Science & Engineering Engagement — a role she held for four years. She is the co-founder of Research2Reality, which uses digital media to shine a spotlight on the contributions academic researchers are making to the country. She also served as Ontario’s first Chief Scientist, with a mandate to advance science and innovation in the province.

“The induction of Professor Molly Shoichet into one of the world’s leading scholarly societies shows that U of T Engineering is home to some of the best engineering researchers in the world,” said Cristina Amon, dean of the Faculty of Applied Science & Engineering. “On behalf of the Faculty, I extend my warmest congratulations to her on this prestigious honour, and I thank her for continuing to be an outstanding ambassador for science and engineering in Canada and the world.”

New Fellows will be formally admitted to the Society at the historic Admissions Day ceremony in July, at which they sign the Charter Book and the Obligation of the Fellows of the Royal Society.