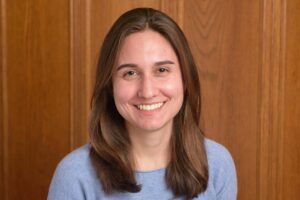 hile exhaust from vehicles and industrial processes are among the most recognized sources of air pollutants, another activity specific to humans also contributes to this issue – cooking. Cooking protein-rich food with oil and heat initiates a complex series of chemical processes that result in the creation of nitrogen-containing chemical compounds, releasing pollutants to both indoor and outdoor air that we breathe on a regular basis.

Under the supervision of Professor Arthur Chan (ChemE) and in collaboration with Professor Jonathan Abbat (Department of Chemistry), Jenna Ditto (ChemE postdoctoral scholar) along with several other ChemE students and postdocs are seeking to gain a better understanding of how these compounds are formed and how they may interact with the human body and affect our health.

In their study, they performed experiments in the lab to simulate the types of emissions one would see by pan frying meat in cooking oil.

“When you heat up a piece of meat, which contains a lot of protein, the protein can chemically transform to produce a variety of new chemical compounds. One example of a new compound we are especially interested in is ammonia, because it can go on to participate in other chemical reactions with the components of hot cooking oil,” says Ditto.

When this reaction occurs, it can form compounds called amides. Their effects on human health and the environment are uncertain, yet it is important to understand how compounds are formed under various conditions and chemical reactions to better understand their ultimate impacts.

In their research, Ditto and her team focused on amide formation from cooking as it hasn’t really been studied much in the past. Several mass spectrometry tools and techniques were used to analyze the results of the team’s experiments, including a technique called triple quadrupole mass spectrometry to look at the chemical changes in the hot cooking oil itself.

The results showed that amides were being released in comparable quantities as both gas and particulate matter. A model called TEST was used to estimate the toxicity of the amides found, revealing that while none were mutagenic, they were developmentally toxic, meaning they could potentially cause harm to humans and animals before and after birth. As this was just a model that isn’t specific to inhalation toxicity, Ditto explains that we need more studies looking at experimental data to support that these are indeed harmful to inhale.

“Our study was a smaller scale lab study, where we really focused on understanding how these amides are formed. With this information, we can look out for this type of product formation happening in real cooking in homes, or restaurants, or other larger scale cooking operations. This will help us get a larger scale idea of the amounts of amides that end up in the outdoor environment, or that we end up breathing,” explains Ditto.

This research, funded by the Canada Research Chairs program and the Alfred P. Sloan Foundation, has been published and can be accessed at: https://pubs.acs.org/doi/full/10.1021/acs.est.2c01409.