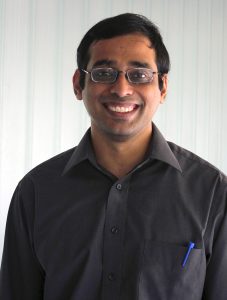 Arun Ramachandran, MCIC obtained his Bachelor’s degree in chemical engineering from the University Institute of Chemical Technology, Mumbai, India, in 2001 and his PhD in chemical engineering in the area of rheology of particulate suspensions from the University of Notre Dame in 2007. He was a post-doctoral scholar in the Department of Chemical Engineering at the University of California at Santa Barbara from 2007–2010.  He is currently an associate professor in the Department of Chemical Engineering and Applied Chemistry at the University of Toronto. He directs the Laboratory of Complex Fluids, which works towards the establishment of fundamental knowledge in the fields of complex fluids and transport phenomena, with applications in  a variety of areas related to chemical engineering. The problem areas in his group include the description of mass transfer in sheared suspensions, wetting of surfaces by the drops of emulsion-based coating formulations, breakup and coalescence in water-in-bitumen emulsions, coalescence in yield stress fluids, blocking of blood vessels by clots such as in strokes or pulmonary embolisms, drug delivery, surface wetting by emulsion-based coatings, characterization of green solvents, particle capture using emulsion droplets and retinal re-attachment surgeries. Ramchandran is currently Canada Research Chair in Engineered Soft Materials and Interfaces. He was awarded the North American Mixing Forum Early Career Award in 2013, an Ontario Early Researcher Award in 2014, and the 2014 Bill Burgess Teacher of the year Award by the University of Toronto for teaching large classes.