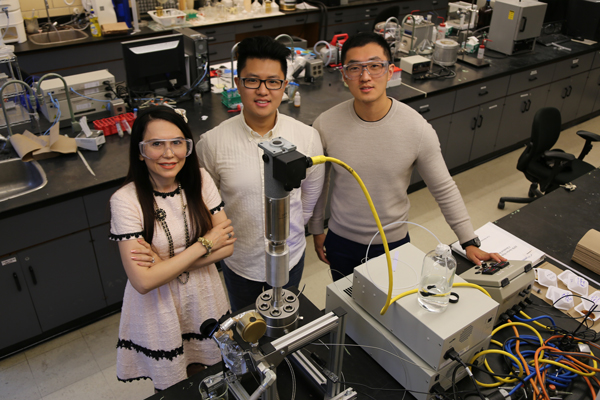 It has been almost a decade since Gisele Azimi was pursuing post-doctoral work at MIT, where she realized just how dependent our technology was becoming on rare earth elements, which pose significant environmental and economic challenges as they are being processed into components for everything from cell phone sensors to wind turbine generators.

“We are utilizing rare earths in all these applications and at the end of the day we just put them into waste,” she says. “The amount of recycling in those days was less than 1% around the world.”

This awareness inspired her to found the Laboratory for Strategic Materials when she later became a faculty member in the University of Toronto’s Departments of Chemical Engineering and Applied Chemistry and Materials Science & Engineering.

Her goal has been to find new ways of obtaining these valuable agents, ideal from places where they have already been used, so that they become renewable commodities that are much easier to obtain. Among the most striking examples of this work has been a novel approach to teasing small amounts of rare earths out of the cracks and crevices of cell phones, without the use of harsh solvents and a great deal of effort.

“Our technique is supercritical fluid extraction,” she explains, noting that at the comparatively modest pressure of about 7000 kPa (about 70 atmospheres) the ubiquitous gas CO2 turns into the perfect tool for the job. “It’s a liquid that behaves like a gas, so it’s a very efficient solvent that can penetrate into solid matrices easily.”

Best of all, she adds, CO2 is abundant, inexpensive, and perfectly safe, so it can be easily obtained and just as easily disposed after use. This outlook characterizes many of the Laboratory’s objectives, which includes activities such as technospheric or urban mining, which adopts a new perspective on waste products such as mine tailings and regards them instead as an accessible source of new agents.

Nor are Azimi’s interests limited to recycling of existing materials. She is also designing innovative hydrophobic surfaces that can be placed inside piping structures that are susceptible to scale, which can eventually clog the flow through these conduits. “We call these new materials ‘scale-phobic,” she says.

Azimi’s accomplishments have earned her the both the 2020 Canadian Journal of Chemical Engineering Lectureship Award and the 2020 CSChE Innovation Award. Later this year she will publish a paper about her work in the Journal, but in the meantime, think about how CO2 can give new life to the most valuable parts of your cell phone.