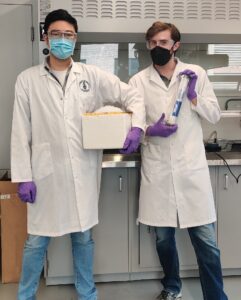 Water scarcity has been a growing issue, including in developed countries. The lack of treatment methods for concentrated effluent in the mining and metals manufacturing industry is one of the contributors to the problem. Under the supervision of Professor Vlad Papangelakis, ChemE PhD students Noel Devaere and Runlin Yuan are focusing on water separation and recycling with Forward Osmosis (FO) and Freeze Crystallization (FC) to reduce the industrial reliance on freshwater in a low-energy cost-effective manner.

“Forward Osmosis and Freeze Crystallization are known technologies, but they have not been widely adopted because of certain disadvantages when operating as standalone treatment methods,” explains Devaere.

To mitigate these disadvantages, Devaere and Yuan have found that an FO-FC hybrid process works best, as it overcomes the stand-alone disadvantages and also reduces the overall energy requirements compared to traditional thermal recovery methods such as evaporation.

This hybrid process operates even better as a climate-driven process because of additional reductions in energy consumption under cold weather conditions, such as Canadian winters, particularly in the north where several mining operations exist.

Devaere and Yuan believe their project will provide an alternative solution for industrial wastewater recovery. They are also seeking to reduce the environmental impact of mine and metal refining operations to put Canadian primary metal production at the forefront of sustainability.

“In reducing the industrial wastewater discharge and reliance on freshwater, we are helping to preserve the aquatic environment and making the increasingly precious freshwater resource more accessible to the people in need,” says Yuan.

Titled, Hybrid forward osmosis – freeze concentration: A promising future in the desalination of effluents in cold regions, Devaere and Yuan’s research has been published in the Journal of Water Process Engineering. Their research was funded by NSERC, Agnico Eagle Mines Ltd, Vale, and Neo Performance Material Inc.