Congratulations to Professor Greg Evans on being the recipient of the 2022 Environment Division Research and Development Dima Award from the Chemical Institute of Canada, presented for contributions to research and development in environmental chemistry and chemical engineering. 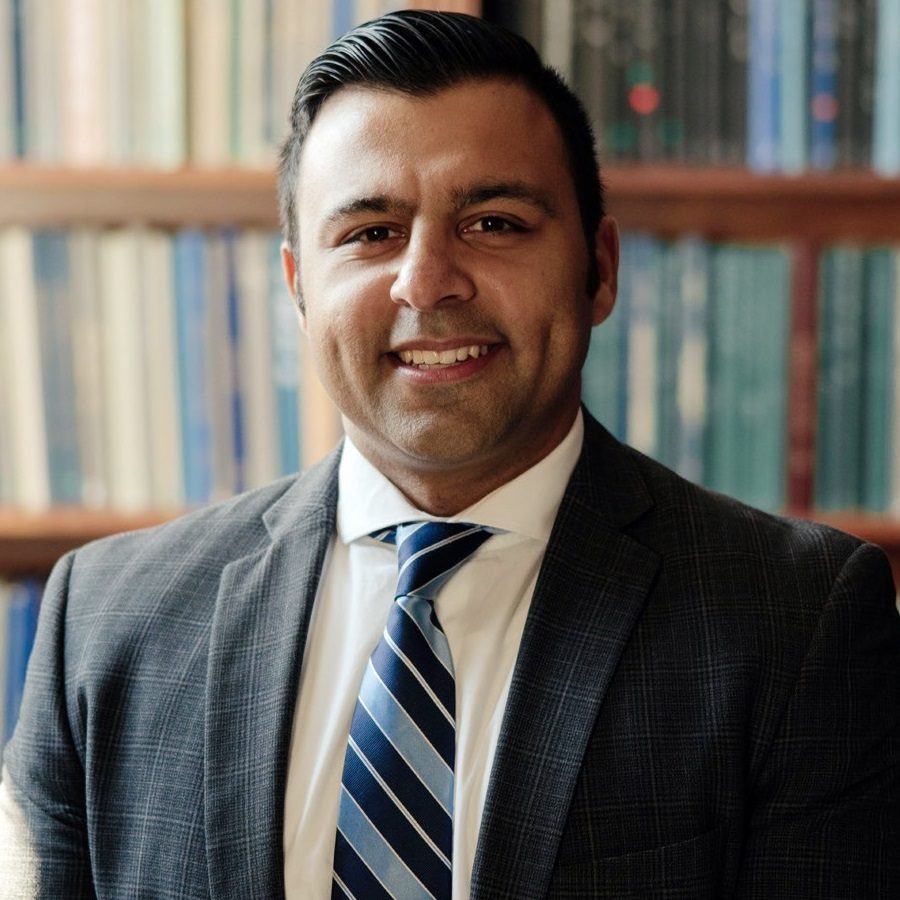 Li-Cycle Holdings Corp., an industry leader in lithium-ion battery resource recovery and recycling in North America, has been named the winner of Fast Company’s inaugural Next Big Things in Tech list.

Fast Company’s Next Big Things in Tech highlights new technology breakthroughs that are expected to help define the future of the industries they serve. Li-Cycle Spoke & Hub Technologies™ were selected as the winner from a long list of applicants, including global giants, intrepid growth companies, and research that’s fresh from the labs.

“Fast Company is thrilled to highlight cutting-edge technologies that are solving real-world problems in unexpected ways. From climate change and public health crises to machine learning and security, these technologies will certainly have a profound impact on the future, and we’re honored to bring attention to them today,” says Stephanie Mehta, editor-in-chief of Fast Company.

Click here to see the final list. The Winter 2021/2022 issue of Fast Company is available online and in newsstands this week. Laura Burget (ChemE 1T6) and her business partner Connie Lo were recently announced as members of the 2022 Forbes 30 Under 30 list for Retail and E-Commerce.

Burget attributes her fourth-year course, Entrepreneurship and Small Business (APS234), for motivating her to dive deeper into researching the skincare industry, leading her to discover a nearly untapped market: affordable, all-natural products.

Frustrated by expensive skincare and misleading labels, Burget and Lo pooled their savings in 2017 to start Three Ships, a vegan, natural skincare brand. While manufacturing began in Lo’s Toronto apartment, products are now sold in over 700 brick-and-mortar stores, including Target, Whole Foods and Hudson’s Bay. The brand is on track to hit $4 million in revenue in 2021.

Click here for the full U of T Engineering news story.

Alison McGuigan is an Associate Professor in Chemical Engineering and Applied Chemistry and the Institute for Biomaterials and Biomedical Engineering at University of Toronto and the Erwin Edward Hart Professor of Chemical Engineering. She obtained her undergraduate degree from University of Oxford, her PhD from University of Toronto and completed Post Doctoral Fellowships at Harvard University and Stanford School of Medicine. Professor McGuigan has received numerous awards including a Canadian Rhodes Scholarship, a Stanford School of Medicine Dean’s Post-Doctoral fellowship, the Wake Forest Institute of Regenerative Medicine Young Investigator Award and the Tissue Engineering and Regenerative Medicine International Society (TERMIS-AM) Young Investigator award in recognition of her contributions to the field of regenerative medicine and tissue engineering. 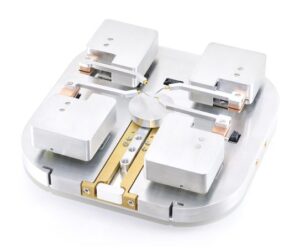 A long-standing collaboration between researchers at U of T Engineering and Hitachi High-Tech Canada (HTC) has been recognized with a Synergy Award for Innovation from the Natural Sciences and Engineering Research Council of Canada (NSERC).

The Synergy Awards recognize examples of collaboration that stand as models of effective partnership between industry and colleges or universities. Key principal investigators from U of T Engineering involved in the collaboration include Professors Yu Sun (MIE), Jane Howe (MSE/ChemE), Tobin Filleter (MIE) and Doug Perovic (MSE).

The roots of the collaboration stretch back decades. More than 30 years ago, Perovic and HTC established a research partnership to develop advanced electron microscopy techniques.

That partnership strengthened the Ontario Center for the Characterization of Advanced Materials (OCCAM), a unique facility that contains leading-edge equipment for imaging, analyzing and manipulating materials with nanometre-scale precision.

“HTC’s contributions have been critical in turning OCCAM into Canada’s premier tandem electron microscopy/surface characterization research centre,” says Perovic. “At the same time, HTC can draw on the practical challenges that users are trying to address to develop new technologies, instrumentation and procedures. It is very much an intimate two-way partnership that has always superseded typical client-vendor relationships or university-industry collaborations.”

Since 2008, HTC has provided nearly $5 million in direct and indirect support for OCCAM, including two full-time staff engineers. Analysis carried out on OCCAM’s equipment helps researchers from across U of T — as well as from many external companies and organizations — understand the natural world and design better devices, from dental implants to solar cells.

Addressing the challenge of physically manipulating nano-scaled samples under electron microscopy imaging has been a particular focus for Sun. 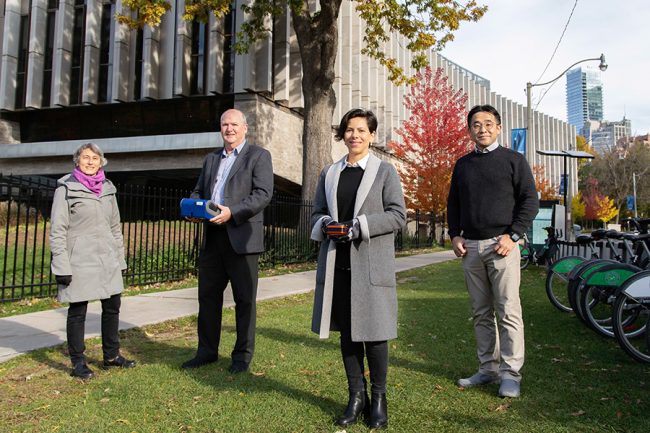 The award recognizes outstanding Canadian teams of researchers from different disciplines. In this case, the team combined their knowledge and skills to better understand and address the critical public health issue of air pollution.

“It is very gratifying to see how research ideas that were seeded almost two decades ago have grown into such a supportive and energising collaborative community,” says Professor Greg Evans (ChemE, ISTEP), one of the recipients of the award.

“The research we have done together has led to real benefits. There’s a lot to be proud of.”

Mickael’s winning presentation entitled, Towards A Stable Hyaluronan-Based Hydrogel as A Biomimetic Vitreous Substitute highlights a promising next generation vitreous substitite for the surgical management of retinal detachment (RD). RD, a separation of the neurosensory retina from the underlying retinal pigment epithelium, is a sight-threatening emergency and the fifth leading cause of blindness in developing countries. Following RD, the retina is detached from the posterior segment of the eye, causing permanent vision loss if left untreated. The current gold-standard for the management of RD employs a vitreous substitute to replace the native vitreous body following vitrectomy surgery, thereby repositioning the retina to its original location. However, most common substitutes, namely expansile gases and silicone oils, can be troublesome for patients due to weeks of blurred vision plus face-down positioning and secondary surgery for oil removal, respectively. Mickael and team developed a novel vitreous substitute composed of hyaluronan, a natural component of the vitreous, crosslinked with poly (ethylene glycol) using oxime chemistry. Their newly designed vitreous substitute comprises similar physical properties to the native vitreous, including refractive index, density and transparency. Additionally, it is both cytocompatible with photoreceptors from mouse retinal explants and biocompatible when injected into eyes of rabbits. The physiological ocular pressure in rabbit eyes was maintained for at least 56 days and the retina, demonstrating the minimally swelling characteristic of their material. Function of the retina was also confirmed by electroretinography up to 90 days. Their vitreous substitute was stable in vivo over 28 days, after which degradation began with approximately 50% loss by day-56.

Erin’s winning paper entitled, Development of Liposomes for the Encapsulation of Iron to Fortify Hibiscus Sabdariffa Calyces Beverage addresses dietary iron deficiency (ID) which accounts for 50% of the global anemia body. ID is prevalent in low-and middle-income countries, impacting the health of their populations and stunting socio-economic development. Recently, Hibiscus sabdariffa calyces beverage is being considered as a food vehicle for iron fortification in Sub-Saharan Africa, where it is regularly consumed. However, the beverage contains polyphenols, which inhibit iron absorption by forming complexes with iron. This study aims to adopt liposomal encapsulation technology to prevent added iron from interacting with polyphenols in the beverage. Preliminary experiments focused on material selection to develop stable liposomes. Two soy lecithin sources, Acros (granular) and ADM (liquid), and their solubilities in 95% and absolute ethanol were compared. Next, the molar ratio of lecithin to cholesterol, a membrane stabilizer, was varied: 1:0, 1:.25, 1:.5, and 1:1. Liposomes were prepared via thin film hydration. Ethanol was removed using a rotary evaporator, the resulting thin films were rehydrated with Milli-Q water or iron sulfate solution (11.3ppm) and the particle sizes were reduced via ultrasonication. The liposomal suspension was separated using an ultracentrifuge. Morphological and encapsulation efficiency analyses were performed to determine the feasibility of fortifying Hibiscus beverage with the formulated liposomes. 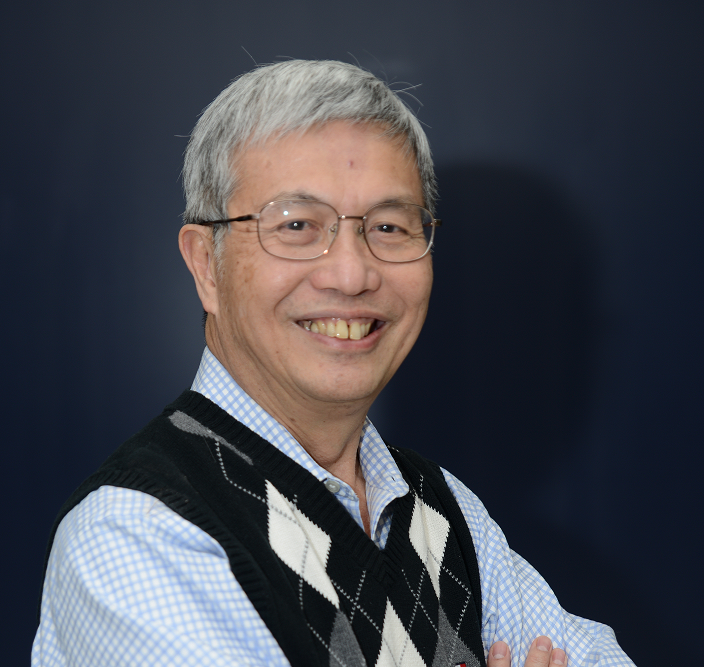 On November 4, Honghi Tran (ChemE PhD 8T2) was inducted into the Faculty’s Hall of Distinction, which is an assembly of extraordinary alumni, selected for membership by their peers for their lifelong accomplishments. These are graduates whose performances have ultimately defined what is most exemplary in our graduates and in our profession. The careers of the members stand as examples and add a sense of reality to the aspirations of successive generations of Engineering students. Located in the Sandford Fleming Building, the Hall of Distinction is a familiar daily presence in the lives of students and is often visited by alumni and their families.

Dr. Tran is Professor Emeritus in the Department of Chemical Engineering and Applied Chemistry, and Director of the Pulp & Paper Centre, University of Toronto. Throughout his career, Honghi established/directed 11 large industrial research consortia, focusing on energy and chemical recovery problems in kraft pulp mills. He supervised/co-supervised 100+ graduate students and postdoctoral fellows, authored/coauthored 310+ refereed papers, book chapters and books, and had 8 patents. The research has greatly benefited the pulp and paper industry in Canada and throughout the world. Honghi received numerous prestigious awards including the 2015 FASE’s Research Leader Award, the 2013 John S. Bates Gold Medal from Pulp and Paper Association of Canada, the 2017 Gunnar Nicholson Gold Medal from Technical Association of the Pulp and Paper Industry, USA, and the 2020 Leadership Award from American Forest & Paper Association. He was inducted to the Paper Industry International Hall of Fame in 2017.

Click here to learn more about this year’s inductees and the 2022 Engineering Alumni Network Award winners.

The University of Toronto is profoundly grateful to the 2021 Arbor Award recipients. These leading members of the University community have played an important role in advancing U of T as one of the world’s great institutions of higher learning and advanced research. This year’s group of recipients include Heba Chehade (ChemE 0T0), Narmeen Haq (ChemE 0T8), and Daryl Wilson (ChemE 8T2).

Heba has been the Faculty of Applied Science & Engineering’s regional ambassador in the United Arab Emirates since 2010. She has spoken with hundreds of students over the years, and her passion for engineering has helped inspire many to pursue an education in the field. Since 2016, she has also supported the Faculty as an Engineering Admissions Assessor and in the last two years, has served as a Nominations Pitch Judge for the Hatchery NEST start-ups.

As a devoted volunteer with the Engineering Alumni Network, Narmeen played a crucial role in overseeing the Calgary chapter during a challenging period in the region. Since relocating to Berlin, Germany, she has offered outstanding help to the Faculty of Applied Science & Engineering in recruiting students and expanding its international alumni network in Europe.

Daryl has been a dedicated member of the board of advisors for the Department of Chemical Engineering and Applied Chemistry since 2013, and has served as Chair since 2015. He has created significant impact for the department during his tenure, including helping lead its five-year strategic planning process and facilitating the implementation of the plan.

We invite you to view this short video from U of T President Meric Gertler thanking our volunteers who help elevate every facet of University life—from opening new horizons for our students to championing the work of our scholars and scientists. Sheida Stephens (PhD Candidate) supervised by Professor Grant Allen is one of three recipients of the 2021 Engineers Canada Manulife Scholarship, which provides $12,500 to each recipient to further their study/research in an engineering field. Click here to explore the various ways this year’s recipients are strengthening their knowledge in the field.