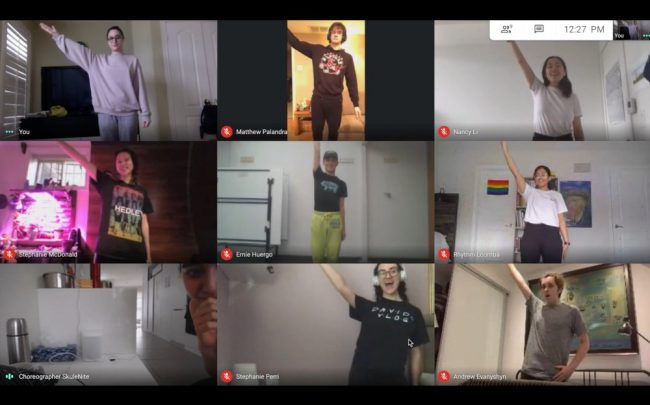 For 99 years, U of T Engineering students have put on a musical and comedy show, Skule™ Nite, to packed audiences at Hart House Theatre. But in its 100th year, while surefire jokes about Skule™ life and Arts & Science students will remain, almost nothing else about the show will be the same.

On Friday, Apr. 16, Skule™ Nite 2T1 will stream to a live audience watching from home. Leading up to the premiere, the team of nearly 80 cast and crew members have had to solve problems and get creative to produce the show remotely.

“In previous years, all of my knowledge came from traditional Skule™ Nite and learning from the people before me, and I would count on this training on a regular year,” says Sofia Tijanic (ECE 1T9 + PEY), director of Skule™ Nite 2T1.

“To direct an all-virtual show, I kind of felt uncertain at the beginning of what I was doing,” she adds. “I didn’t have filming experience, knowledge of camera angles, audio and lighting setups, but that’s when everyone came together to pull through.”

The lighting crew switched their expertise from theatre lighting to at-home setups. Students who signed on as set painters turned into animators. Filming equipment and costumes were mailed from home to home, including to team members in the U.S. and Mexico.

“Everyone came on with previous experiences with Skule™ Nite and completely reimagined their roles, myself included,” says Tijanic.

Cast members Rhythm Loomba (Year 2 EngSci) and Thomas Dell (Year 4 EngSci) had to adjust their acting techniques with the help of performance directors.

“I had to learn how to sync up my vocals to others over Zoom,” says Dell. “It started out as a challenge but in the end, it was fun. It was like we were recording songs in a studio.”

When filming sketches, Loomba found it difficult to anticipate her co-performer’s reactions.

“Because they aren’t there, and you can’t feed off that energy,” says Loomba. “But the Skule ™ Nite executive team did a really great job hyping us up along the way.”

Due to the uniqueness of this year’s production, Loomba has had the rare opportunity to be on both the cast and technical crew.

The format has led to other firsts as well: the team will get to watch the premiere along with the rest of the audience, pets are technically allowed to attend, and food and drinks aren’t only permitted, they are strongly encouraged.

As for what to expect: “We’re definitely going to give tribute to it being 100 years,” says Tijanic. “We’ll also touch on the experiences of this past year and how unusual it has been for us all.”

On premiere night, Dell plans to make sure his assignments are finished early and has snacks ready. Loomba says she has scheduled watch parties with her friends and family for Friday and through the weekend.

“The thing with Skule ™ Nite is that it’s such a wonderful, shared experience for everyone — for the people who make it, the people who watch it, the alumni who were a part of it,” says Loomba. “I’m so glad we continued with Skule ™ Nite this year because it’s been such an isolating time. Being part of a show like this has reminded me, and will remind others, that the community is still there.”